As we look at the rest of Sunday, we will be watching the potential for ongoing showers and storms across portions of northern Minnesota early Sunday evening (with strong storms in northwestern Minnesota), but storms will be starting to form out to the southwest that will eventually work their way up toward central Minnesota and the metro as we head through the evening and overnight hours. 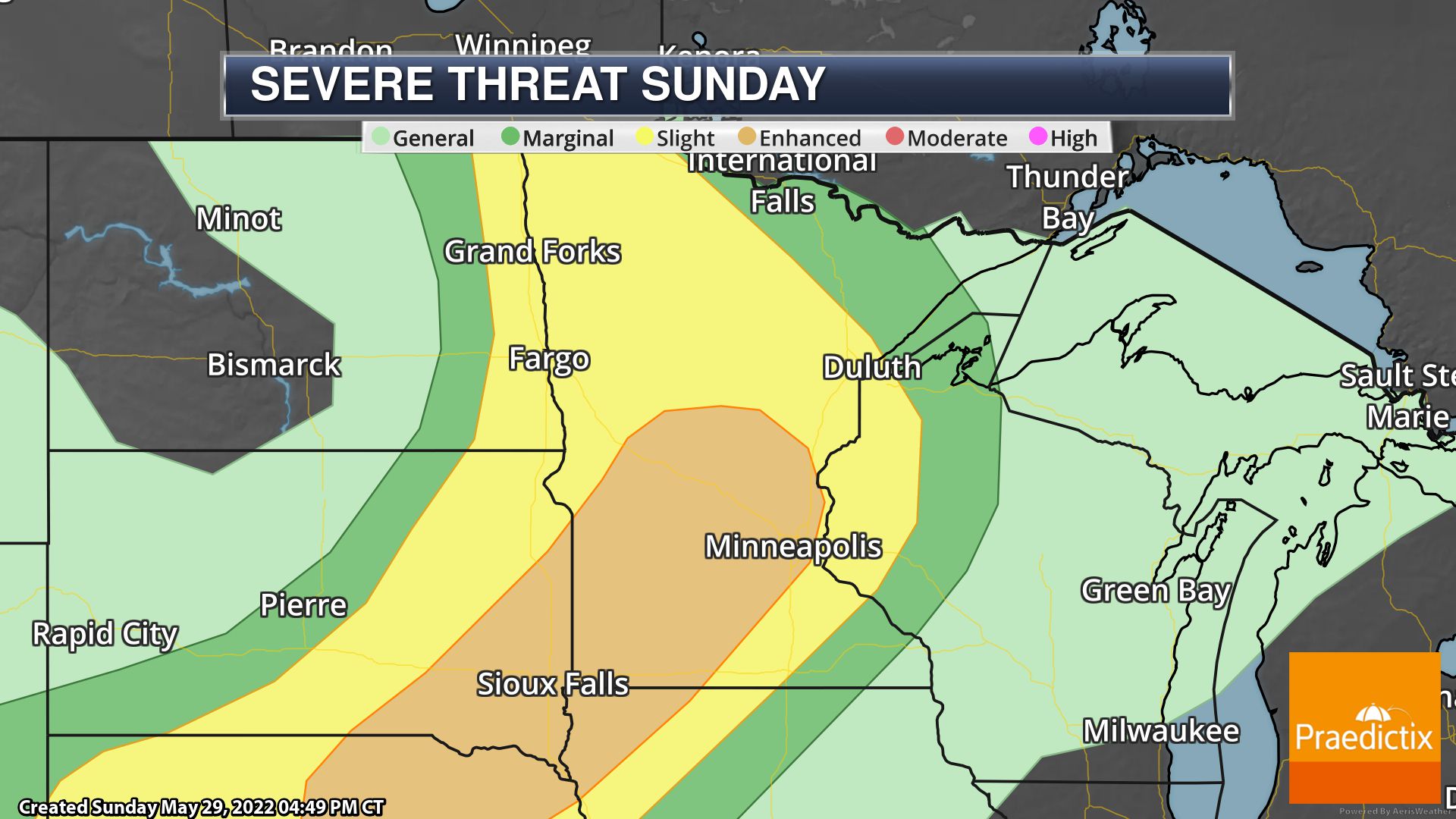 Radar forecast loop: 7 AM Monday to 7 AM Tuesday

It wouldn’t be a holiday without some interesting weather, right? As an area of low pressure slowly moves northward across the Dakotas on Monday, we will watch showers and storms. While some showers and isolated storms will be possible through the morning and afternoon hours, the storm chances increase later in the day out in the eastern Dakotas and western Minnesota near and along the cold front and triple-point area (where the low pressure meets the cold and warm fronts) that will drive across Minnesota as we head through the evening and overnight hours. Storms back in western Minnesota and into the eastern Dakotas will be capable of very large hail (2″+ in diameter) and the potential of strong, long-tracked tornadoes earlier on in storm formation, especially if storms can stay individual. As these storms work farther east, damaging wind gusts to 80 mph will be possible. 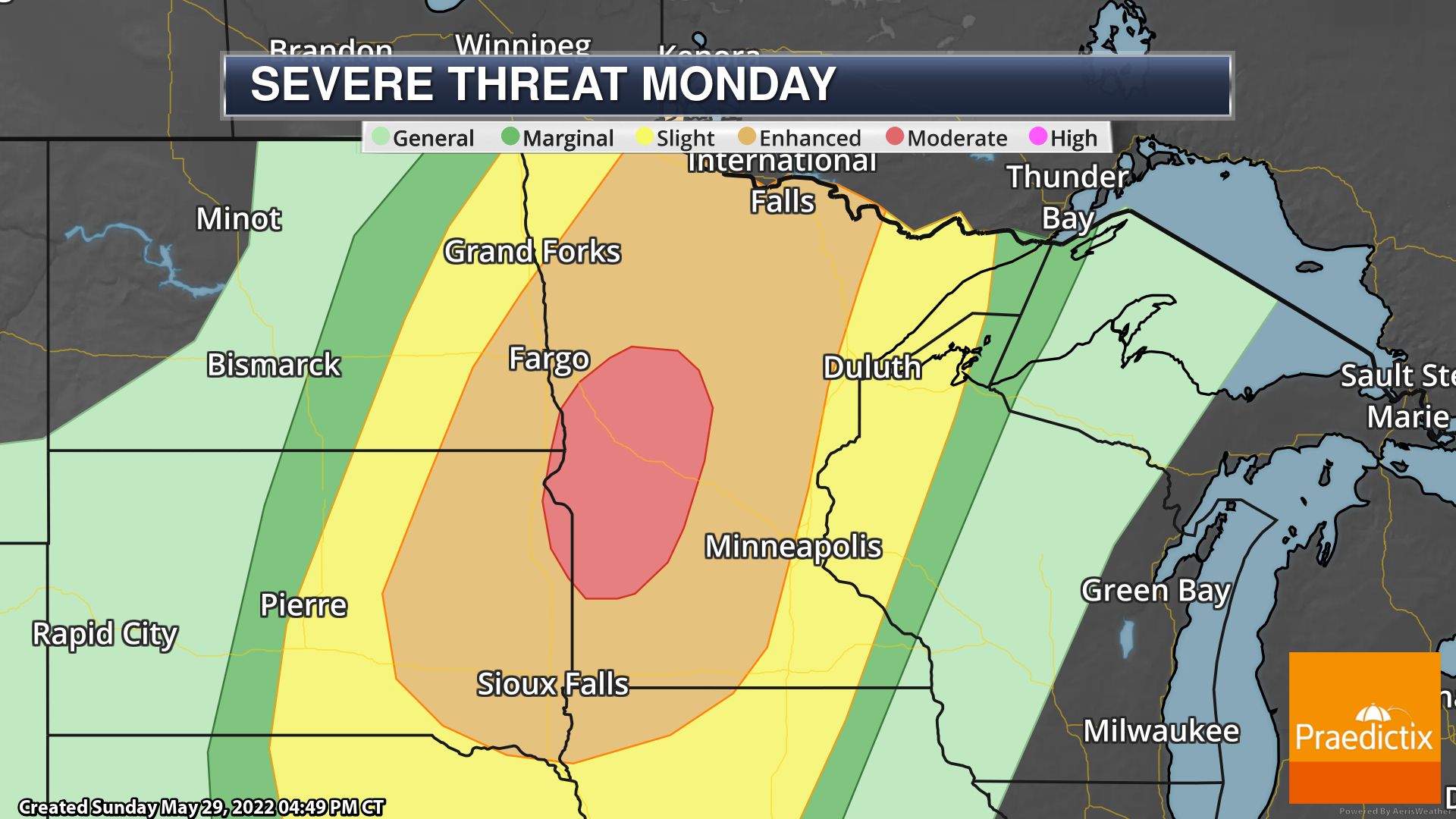 For portions of western Minnesota – west of the St. Cloud area, including Willmar, Fergus Falls, Marshall, and Alexandria – we are watching a Moderate Risk of severe weather (threat level 4 of 5) on Memorial Day. The areas under the Moderate Risk have the highest potential of seeing those individual storms capable of strong tornadoes. A chunk of the rest of the state is under an Enhanced Risk of severe weather (threat level 3 of 5), which just nudges into portions of the western metro. We will watch the potential of large to very large hail, wind gusts to 80 mph, and several tornadoes across the rest of the severe threat area. 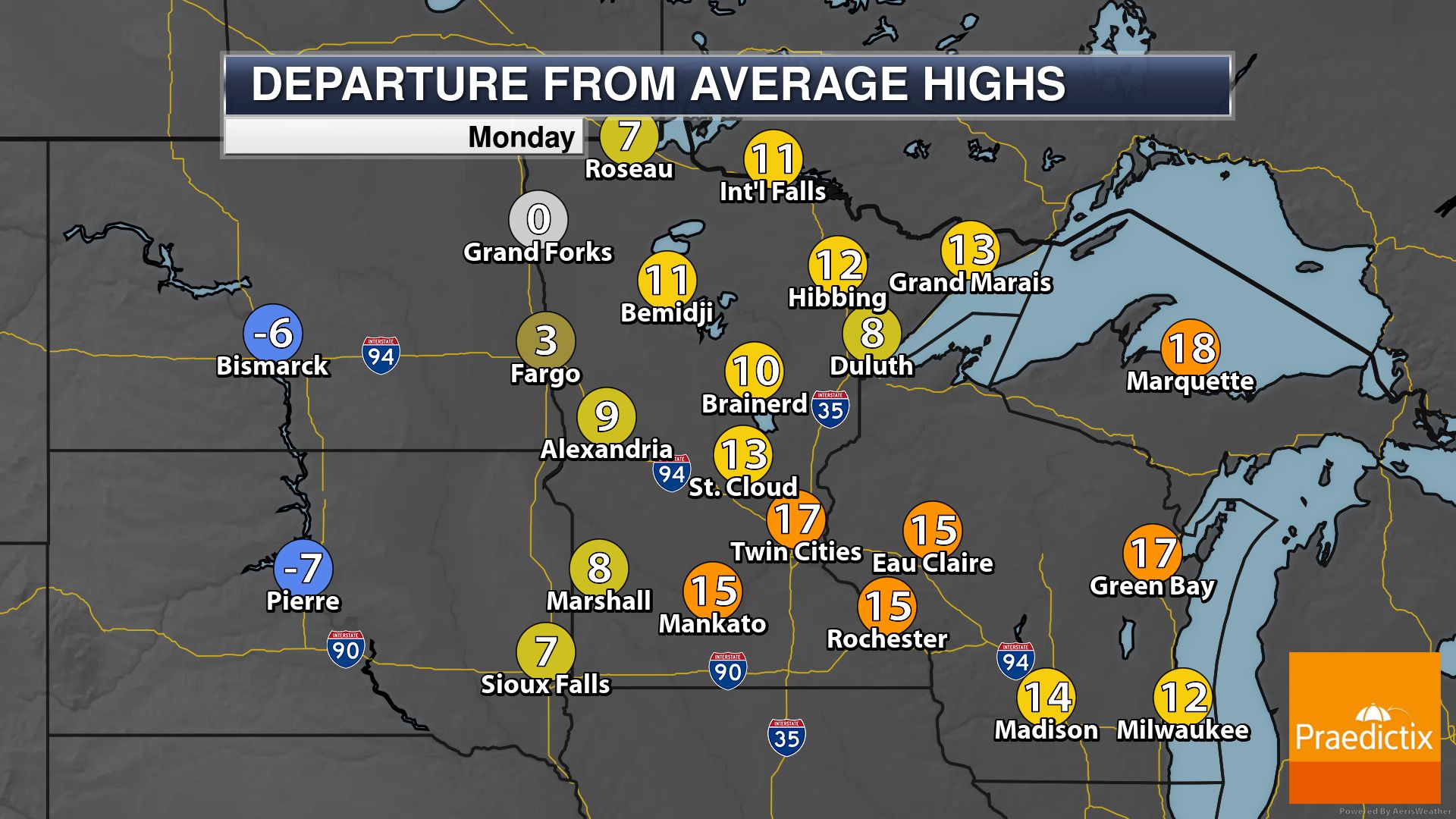 With that severe threat in place, we will watch the chance of showers and storms across the state on Memorial Day Monday. It won’t be an all-day washout with the best chance of rain occurring in the afternoon hours through the overnight. Highs will range from the 70s in northern Minnesota to near 90F in southern parts of the state. 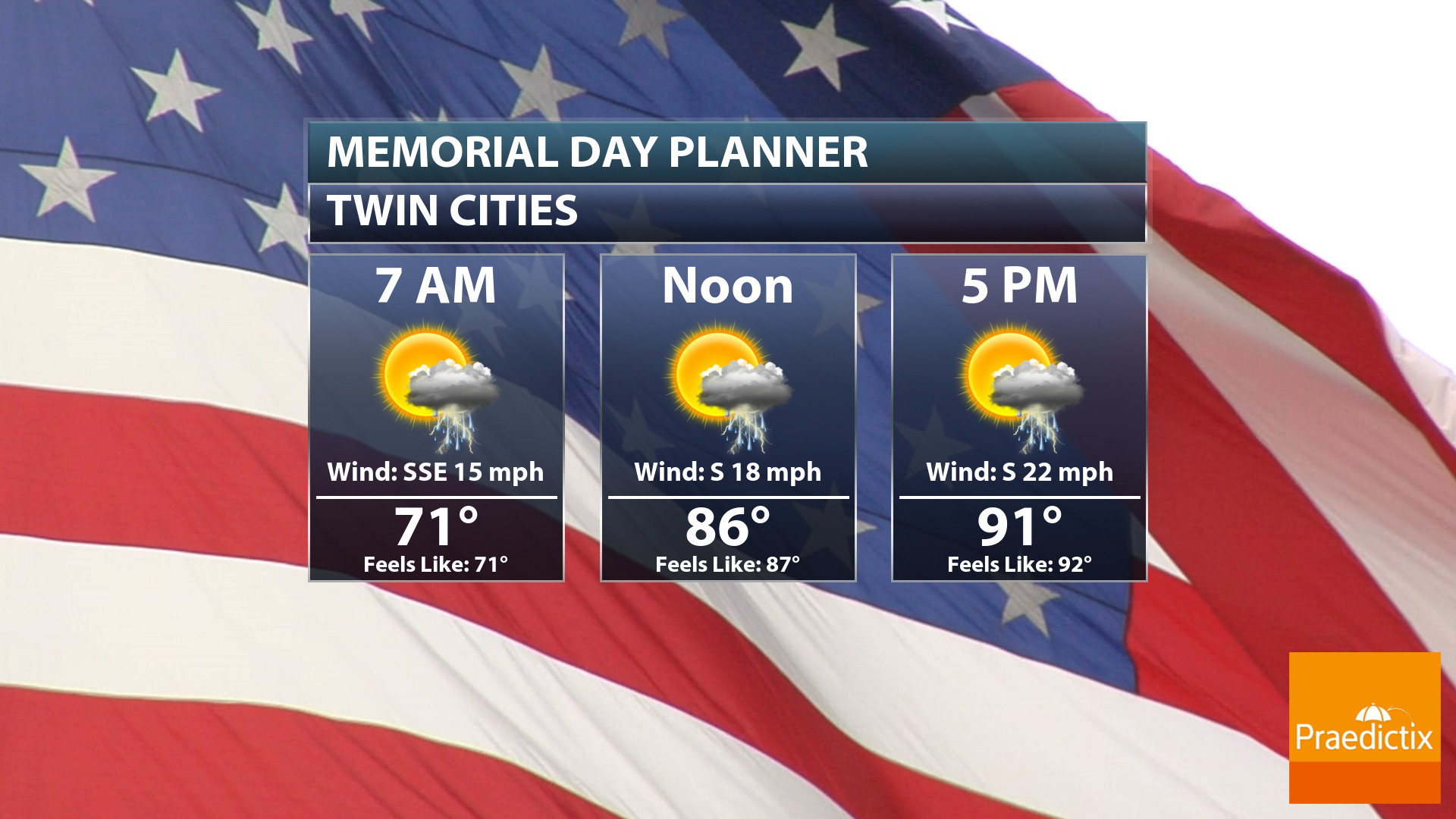 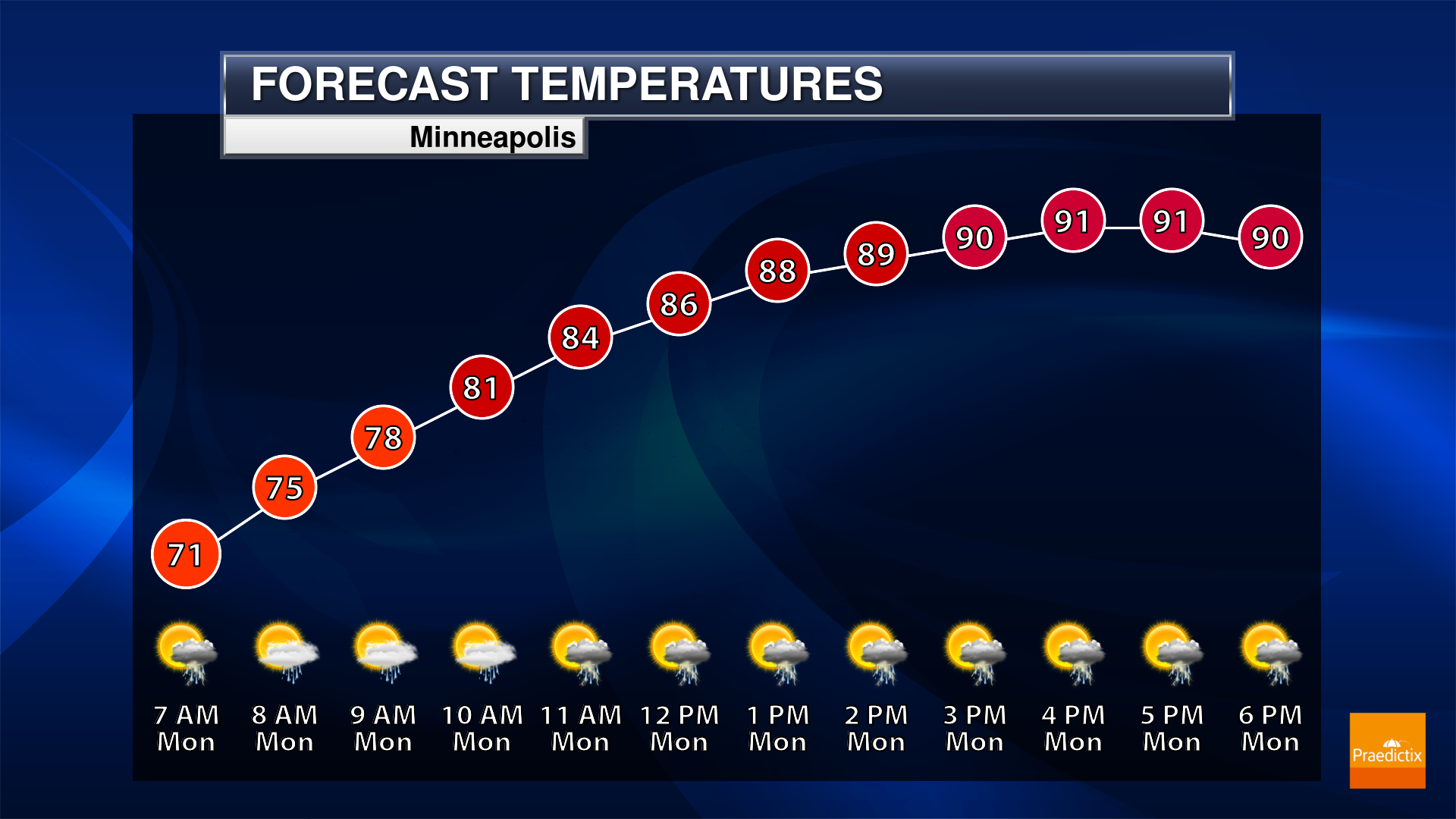 So for Memorial Day in the Twin Cities, we will watch the potential of showers and thunderstorms, particularly early on in the day and then again as we head into the afternoon and overnight hours. Highs look to climb into the upper 80s and low 90s as we head late in the day. 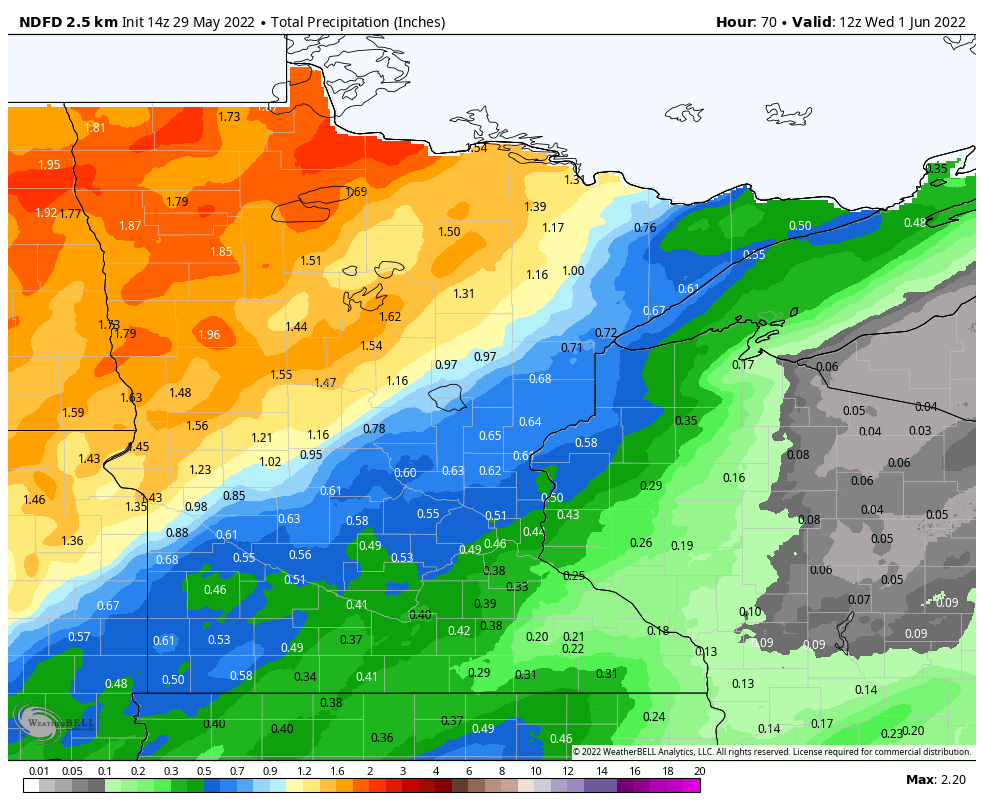 Through Wednesday morning, the heaviest rain will fall across the west-central/northwestern/north-central areas of the state, where at least 1-2″ of rain could fall. Rainfall totals will taper off the farther south and east you go. 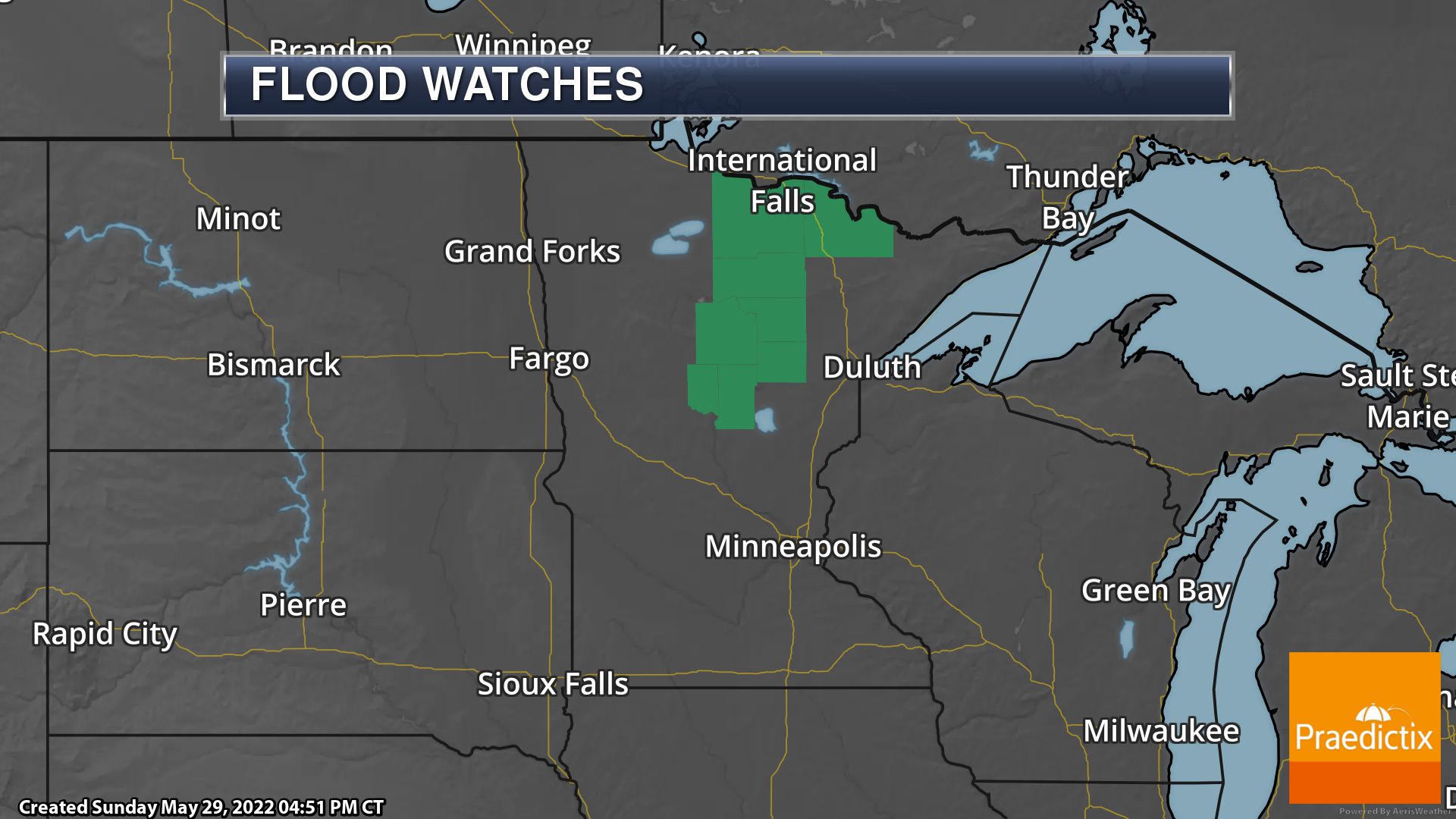 Due to the additional expected rain across portions of north-central Minnesota on top of very heavy rains recently that have led to flooding (along with snowmelt) across northern parts of the state, Flood Watches are in place through Tuesday morning.

Cooler To End May Tuesday And Begin June 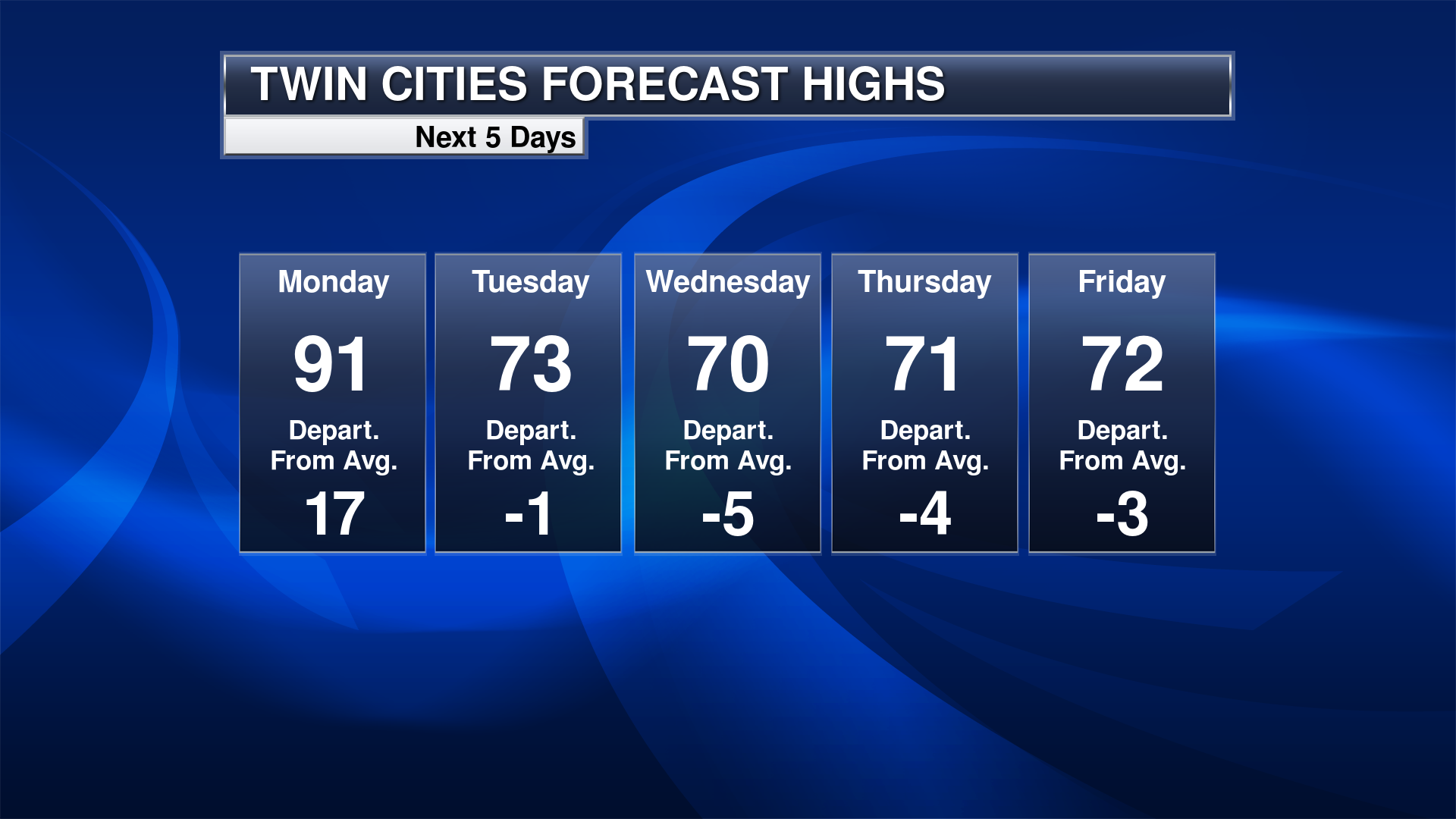 After we get past the warmth of the Memorial Day weekend, we will see cooler weather settle back in with highs in the 60s and 70s to end the month of May on Tuesday and begin June mid-next week. Some lingering showers or thunderstorms will be possible on Tuesday – especially as you head farther north – as the area of low pressure that moved into region lingers in northwestern Minnesota Tuesday morning before finally pushing out. Another slight shower/storm chance moves by Friday Night/next Saturday. 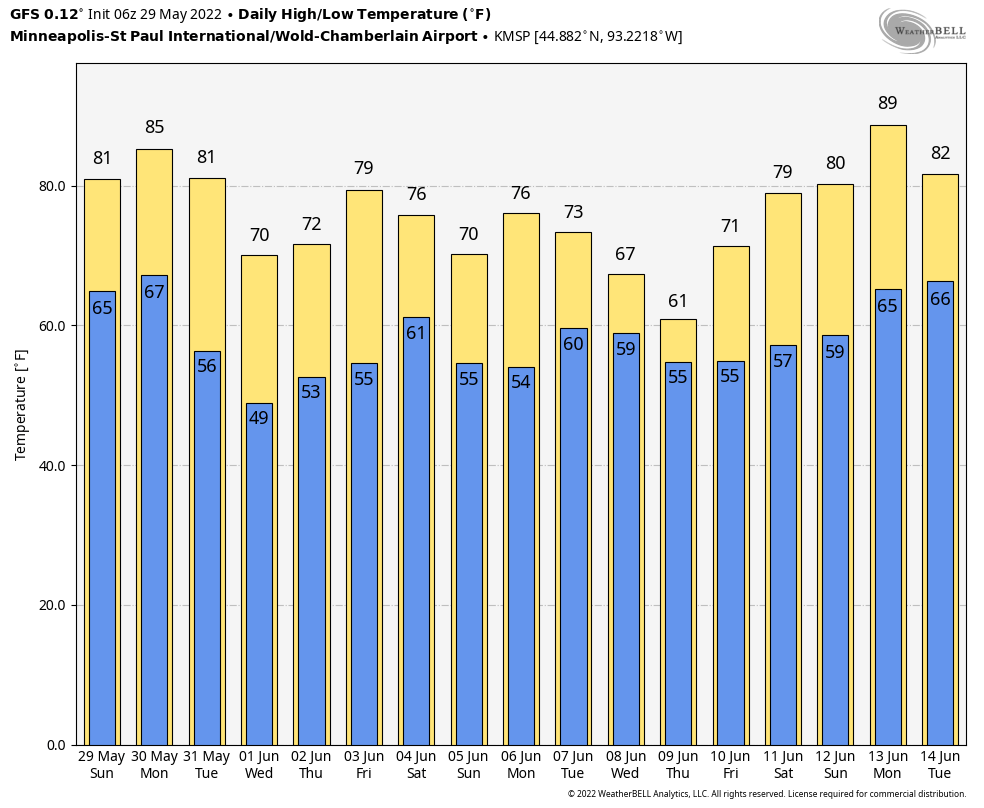 Looking farther out, models keep us in the 60s and 70s for highs through much of the first half of June at the moment.

Sgt. Major Bill Paxton may have said it best: “May we never forget our fallen comrades. Freedom isn’t free.” Memorial Day is a time for solemn reflection and thanks for the Americans who paid the ultimate price to keep us free.

I wish I could flip a switch and turn off the thunderstorms. An agitated atmosphere will cook up more warm, rising thermals of sticky air – mutating into bloated cumulonimbus clouds, thunderheads later today. There is a significant threat of isolated tornadoes over central and western Minnesota PM hours. If you’re out on your favorite lake or trail stay alert. I always ask myself: where would I go if threatening weather approached me right now? Sirens may be sounding by dinnertime.

Showers linger on Tuesday, followed by a breath of fresh, Canadian air, with cooler temperatures and lower humidity the latter half of the week.

Good news: Minnesota is still hurricane-free! Tropical Storm Alex may form near Florida within 7 days. At least we have that going for us. Stay safe today. 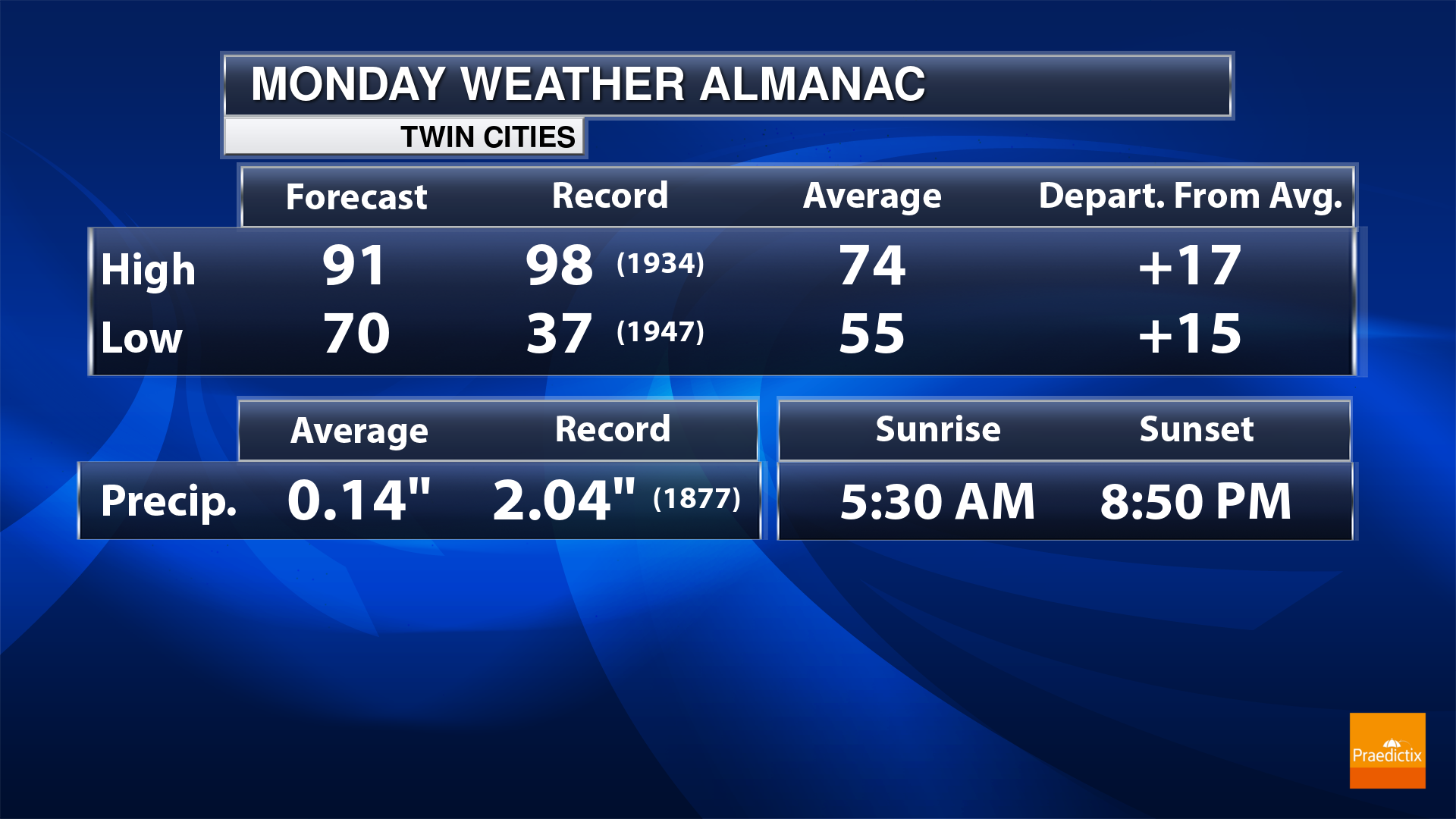 This Day in Weather History
May 30th

1998: A devastating line of storms hits east central Minnesota. 100 mph winds rip through Scott and Dakota County. Over 500 homes are damaged in Washington County. 15,000 trees are lost in the Twin Cities metro area, and 500,000 people lose power in Minneapolis. 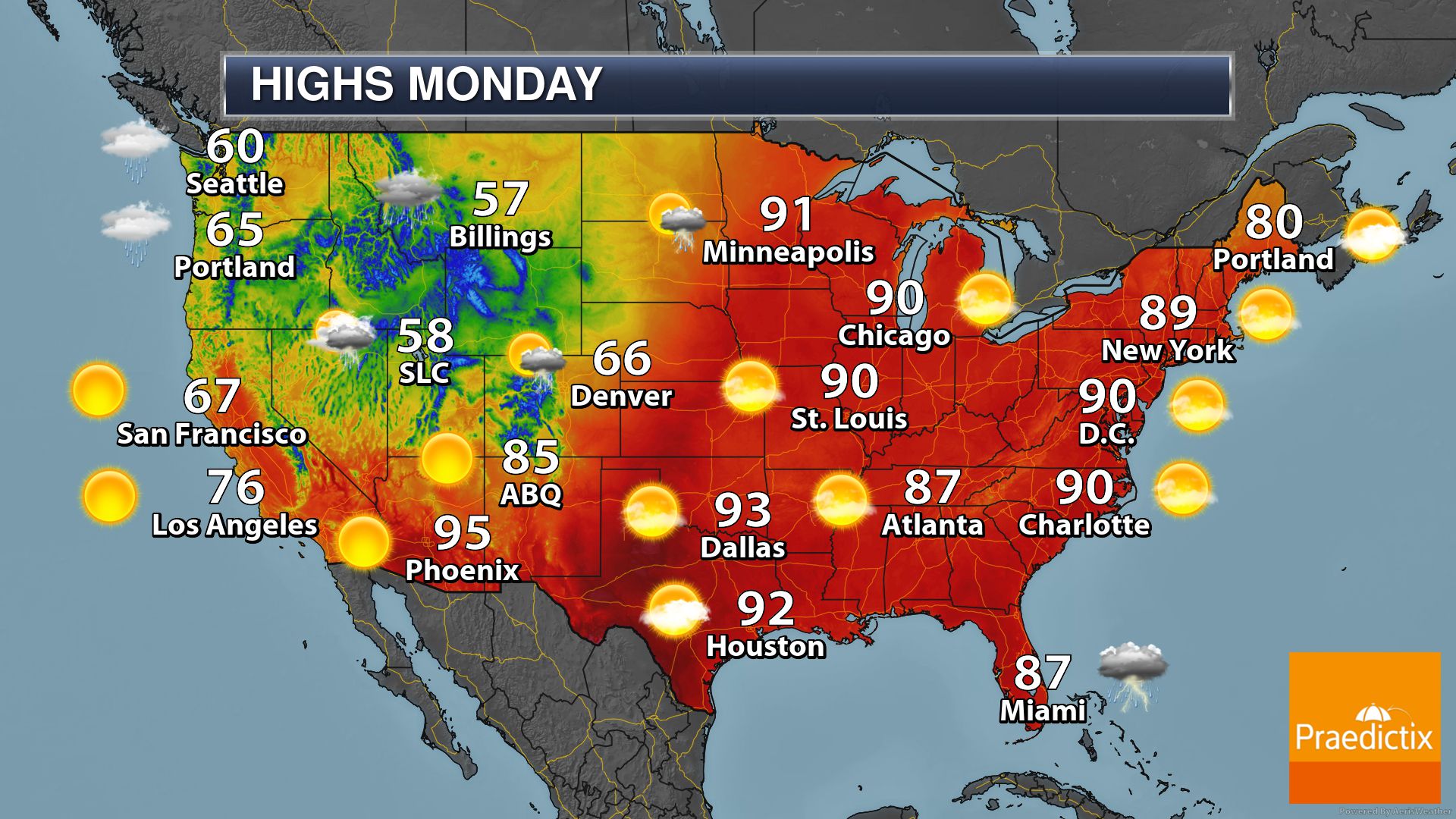 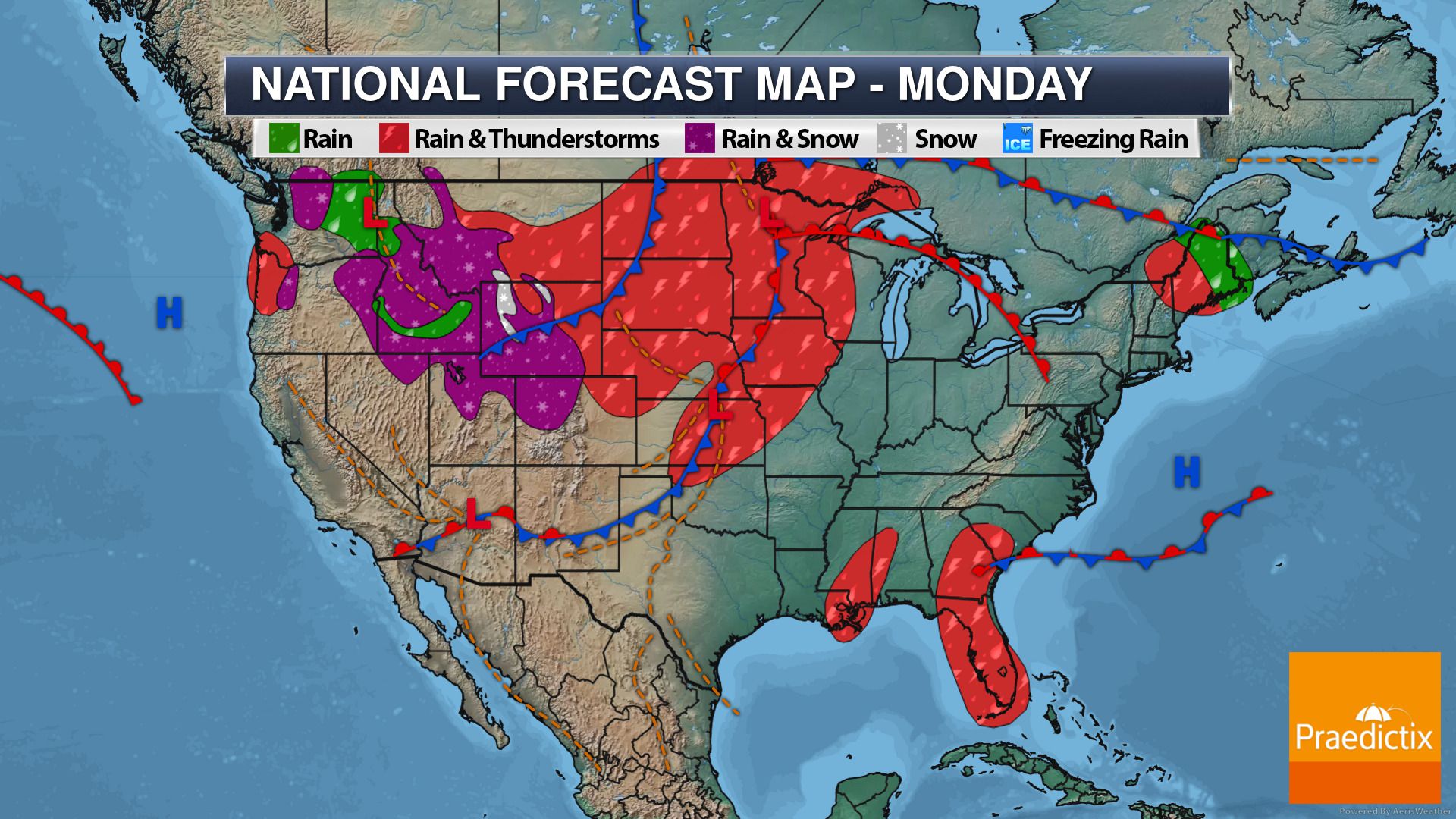 For Memorial Day, we will be watching the potential of severe storms across the upper Midwest with snow back toward the Northern Rockies. Some showers and storms will also be possible in New England and the Southeast. 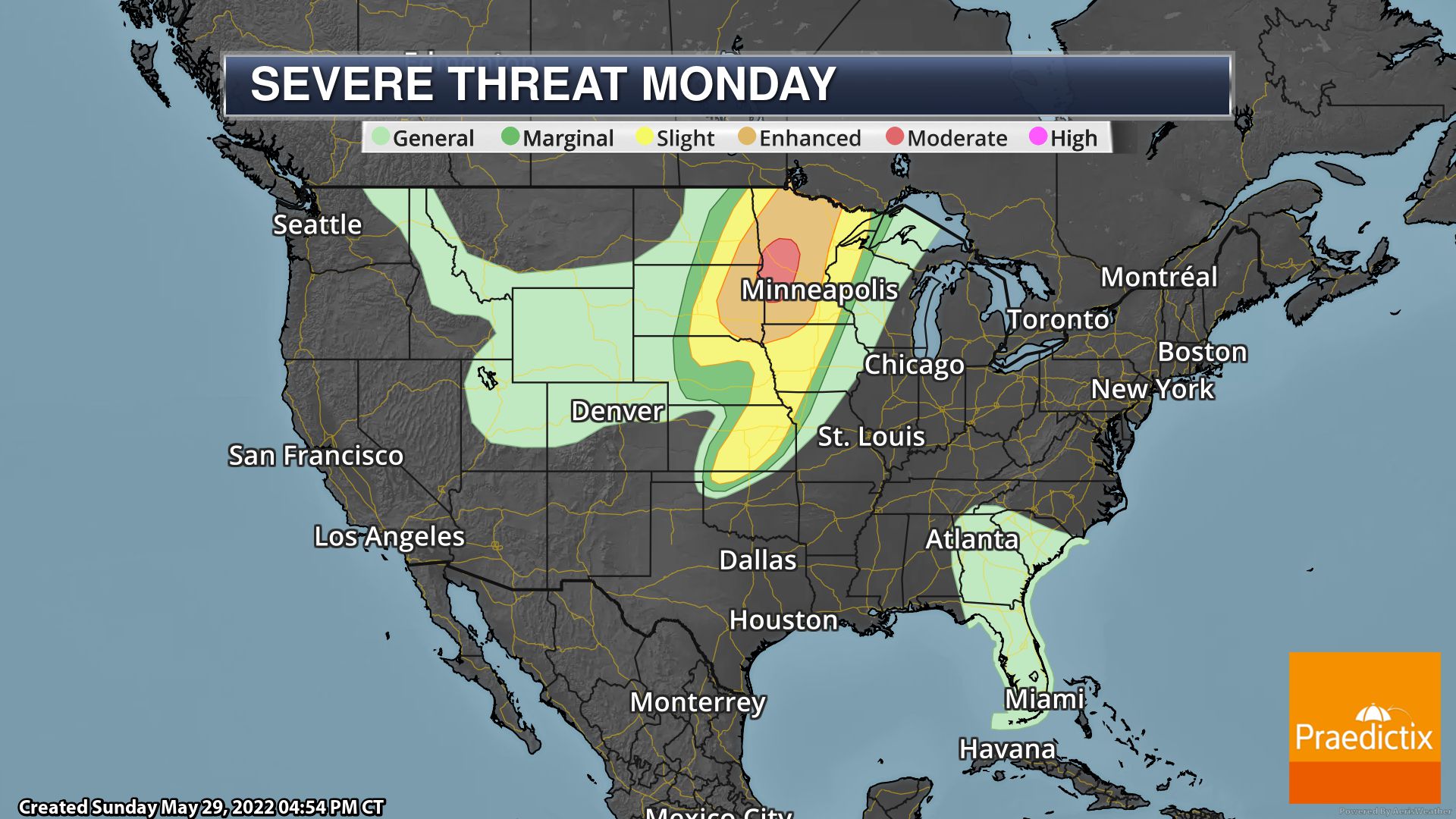 A Moderate Risk of severe storms (threat level 4 of 5) is in place across portions of Minnesota and the far eastern Dakotas. Large to very large hail, wind gusts to 80 mph, and several tornadoes – including the potential of strong, long-track tornadoes – will be possible in storms during the later afternoon hours into the overnight time period. 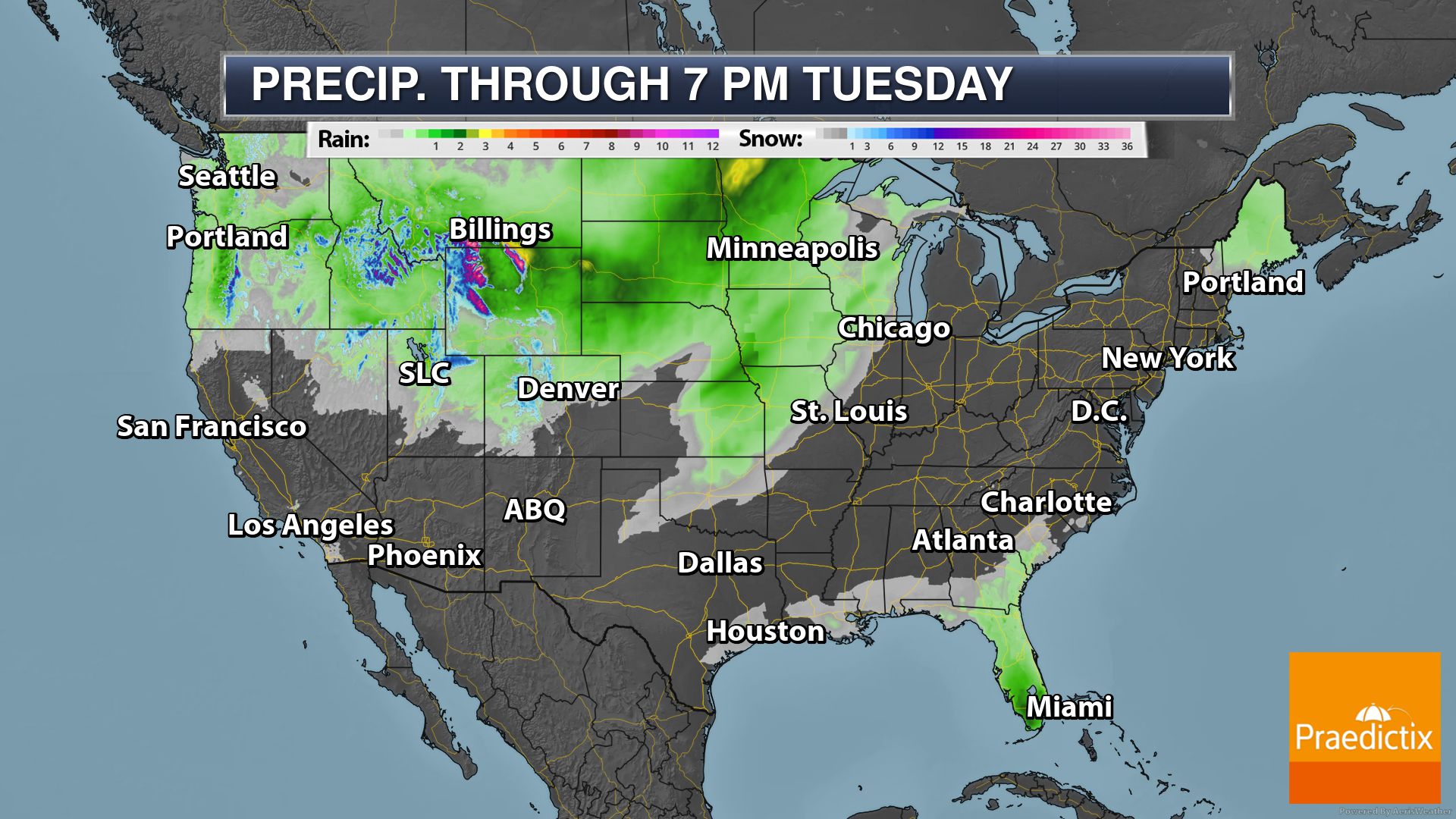 Thorugh Tuesday evening, we will be watching the potential of heavy rain with over three inches in some spots across the Northern Plains and upper Midwest. Meanwhile, we’re reaching the end of May, but it’s still snowing in some of the mountain ranges out west with 1-2 feet possible for areas like the Bighorn Mountains.

Why are blackouts looming? Blame extreme weather, not wind and solar

More from Canary Media: “Extreme heat, ongoing drought and wildfire threats are putting power grids across the Western U.S. at increased risk of rolling blackouts this summer. This finding, announced by the country’s primary grid monitor last week, has been backed up by analysis and by real-world events in California, Texas and the upper Midwest over the past month. But while this increased risk coincides with the rapid shift from fossil fuels to renewable energy, it is not caused by the shift, grid experts say — despite some claims to the contrary. The main culprit for reliability problems is climate change and the extreme weather it causes.“

‘Flash Droughts’ Are the Midwest’s Next Big Climate Threat

More from Grist: “September in Oklahoma is typically a rainy season, when farmers take advantage of the state’s third-wettest month to plant winter wheat. But last year, many were caught off guard by abnormally dry weather that descended without warning. In the span of just three weeks, nearly three-quarters of the state began experiencing drought conditions, ranging from moderate to extreme. Fast-moving droughts like this one are developing more and more quickly as climate change pushes temperatures to new extremes, recent research indicates — adding a new threat to the dangers of pests, flooding, and more long-term drought that farmers in the U.S. already face. Known as “flash droughts,” these dry periods can materialize in as quickly as five days, often devastating agricultural areas that aren’t prepared for them.“

US, UK, other G7 countries to ‘predominantly decarbonize electricity sectors by 2035’

More from Electrek: “The G7, made up of the world’s largest economies, today agreed to “predominantly decarbonized electricity sectors by 2035.” The G7 also agreed to end government financing for international coal-fired power generation and speed up the phase-out of unabated coal plants by 2035. “Unabated” refers to electricity generation that doesn’t use technology to capture emissions. … The coal phase-out is a particularly big deal for Japan, which got 32% of its electricity from coal in 2019.“